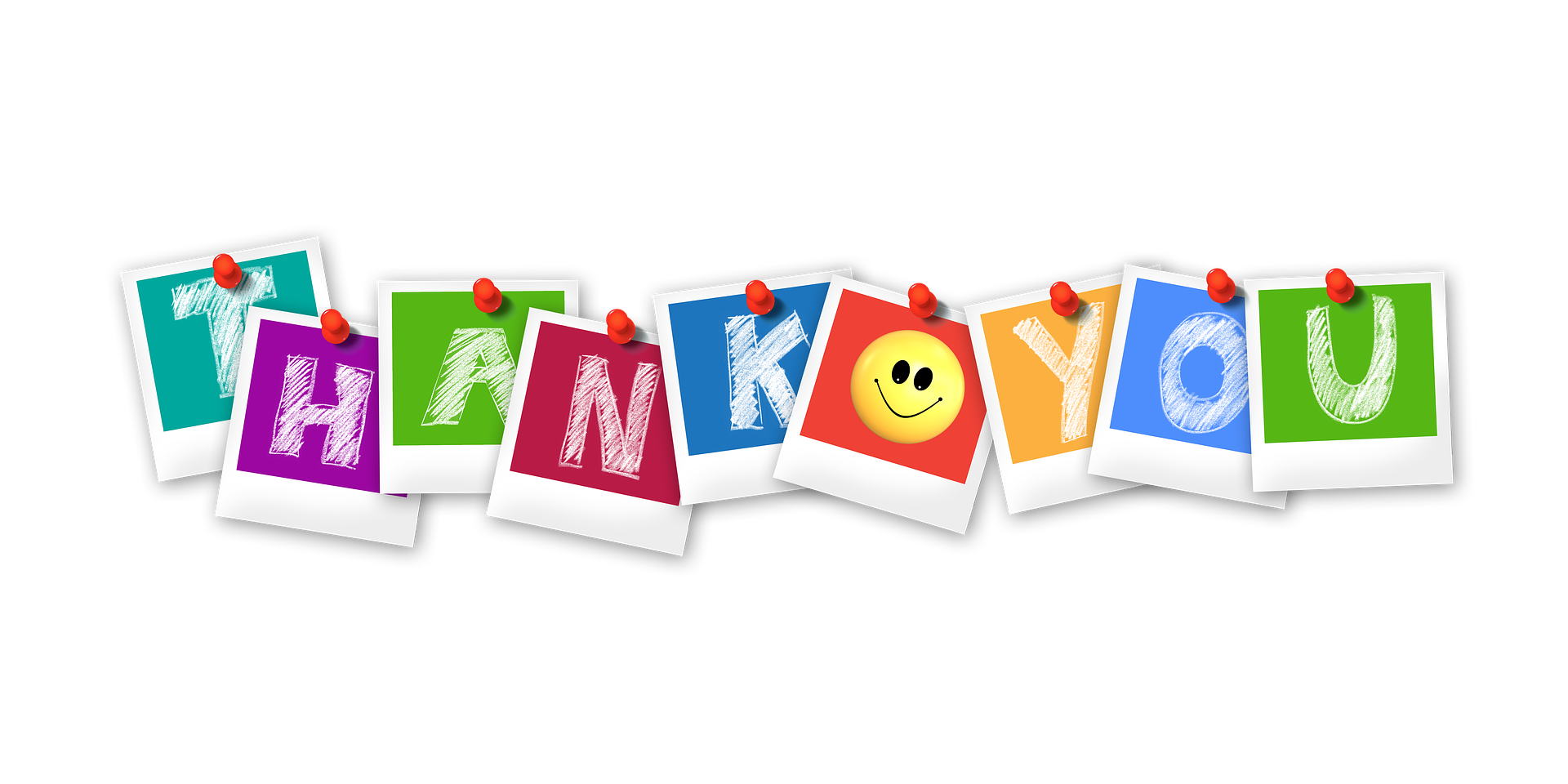 The EuroGames 2019 in Rome ended yesterday with the brilliant finals of the women’s Standard and men’s Latin. We from the organization committee of the DVET and ÖTSV would like to thank all those who made this event possible and contributed to the success!

The results can be found on the website of the DVET.

From now on you can buy a voucher for the gala buffet on Saturday evening at the bar in the ballroom of the Palacavicchi. Booking via the EuroGames website is no longer possible. Anyone who had booked over that website, can exchange his voucher in a voucher of Palacavicchi.

On the last competition day, on Saturday, July 13, 2019, we will start one hour later than originally planned. This shifts the entire schedule back one hour. Please note the updated schedule. 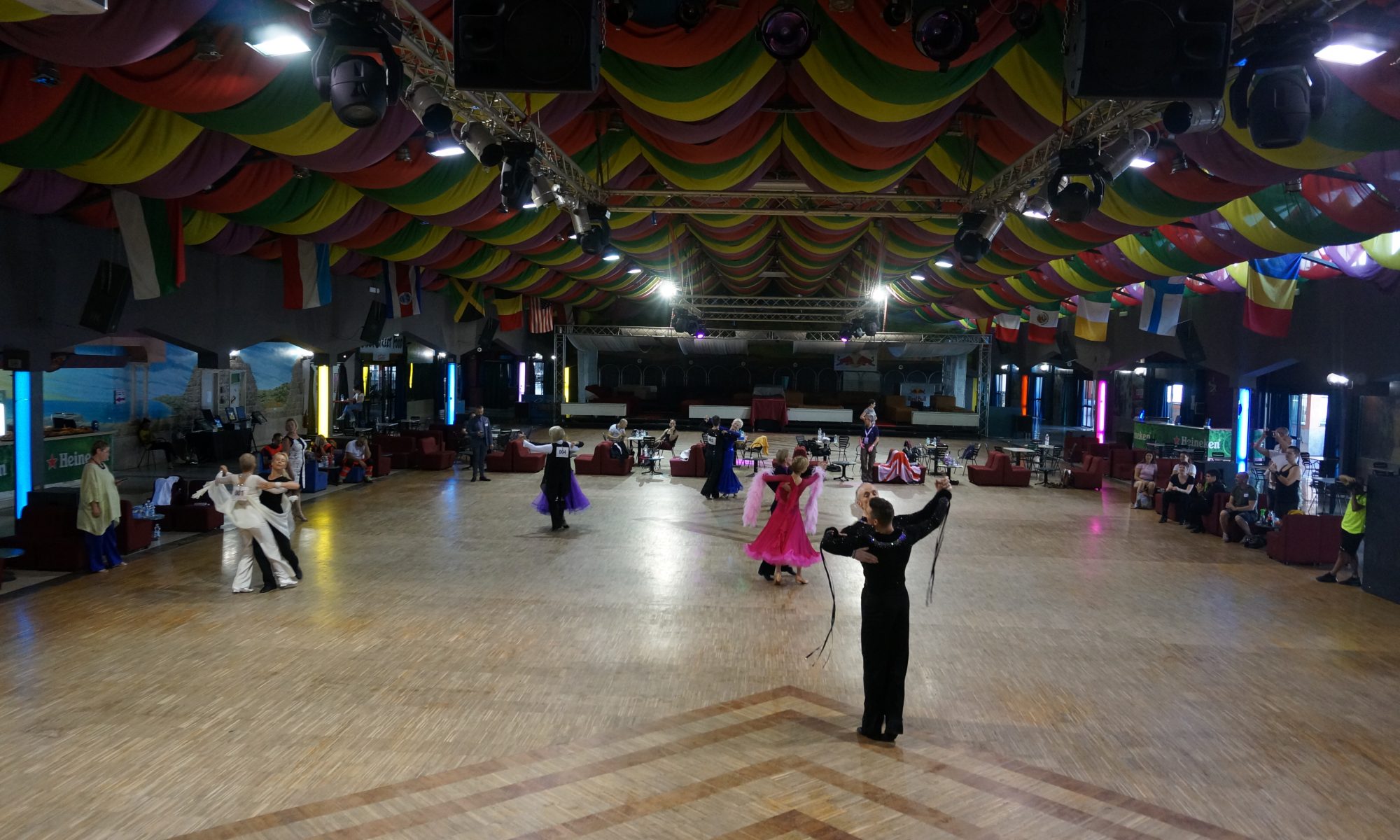 … was Barbara Nagode Ambroz‘ comment, one of the international adjudicators of the EuroGames.

After a very successful reception for all dancers by the host association DVET and the UKSSDC, a nowhere accreditation, a just in time delivery of starting numbers and a printer, we started on time with the first tournament: women and men 40+ combination (danced together, but awarded separately). We still hope for the delivery of medals …

You will find the results here: Competition – Sartlists/Results

On Saturday after the tournaments and after the AGM of ESSDA there will be a gala buffet and a ball/social dance at our venue Palacavicchi. Palacavicchi’s kitchen is requesting reservation via the EuroGames website: www.romaeurogames2019.org/category-product/dance. 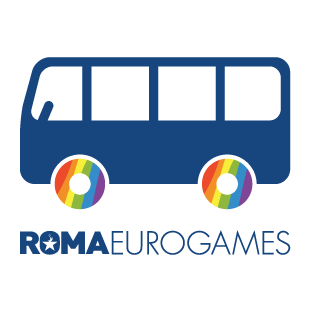 Until this afternoon (Wednesday, 10.07.2019) you can book the direct shuttle bus from Palacavicchi to the Tre Fontane Stadium via the EuroGames website. The timetable of the dance competitions on Thursday is scheduled that you will be able to take that bus at 5pm.

To access the opening you need your EuroGames badge.

Today, Wednesday, 10th July 2019 from 3pm to 10pm you can get accredited here in the center of Rome:

There was a weather warning for Rome, so the organizers of EuroGames do not want to take any risk and have moved the location for accreditation.

Here is some advice that may be useful to you if your aircraft has just landed at Ciampino airport or Fiumicino airport or if you are traveling within the city of Rome. Thorsten Reulen has compiled his travel information (which you will not find in such detail in any expensive “Travel Guide Rome”) in a pdf document “Arrival Instrucitions Rome“.

Information for your journey to the venue Palacavicchi can be found in this article:

Where is this dance tournament, please? 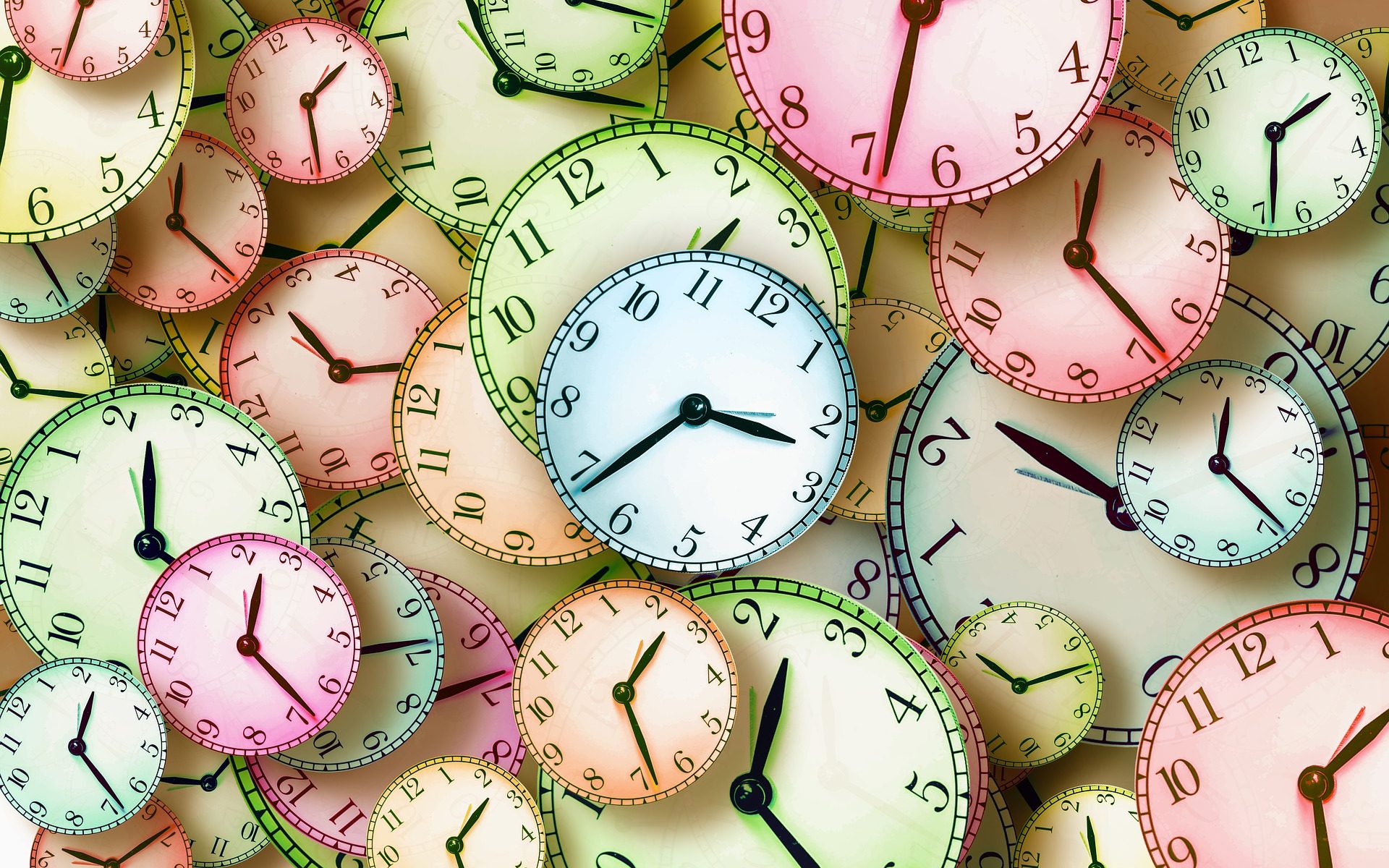 In the section “Competition – Schedule” you can now find the detailed schedules for the free practice on Wednesday and for the three competition days Thursday, Friday and Saturday.

Please be aware of the announced dance of the general look in your graded competition.

All showdance couples and team captains of the showdance groups have been informed by Thorsten about their options for rehearsals.

We decided to hold the two competitions Salsa and Tango Argentino open for everyone. So, if you want to participate in the Salsa and/or Tango Argentino contest, you can register for it from now on:

Any combination of dance couplese is allowed: same-sex couples male and female, mixed or mixed reverse role. We are looking forward to your spontaneous registrations! Other than planned, the Salsa and Tango Argentino contests will not take place on Friday evenings, but Friday in the afternoon. For the special rules please visit Competition Rules.

On Wednesday, the 10th of July, 3 hours of practice time can be offered to all EuroGames participants on the competition floor at Palacavicchi, starting from 16:00. To enable as many dancers as possible to benefit from this offer, we’d like to change the music three times. The following sequence is planned:

This offer is for free 🙂

Unfortunately, we have not been successful to organize a venue for training on Tuesday, July 9th 🙁

Anyone who wants to have access to all the sports venues, the opening ceremony and the closing ceremony as a participant of the EuroGames needs to have his “badge”, ie his accreditation card. Registered dancers will receive their badge until Wednesday evening at 10 pm exclusively at the central accreditation point in the Rainbow Village. From Thursday morning all dancers’ badges that have not yet been picked up will be available exclusively at “Palacavicchi” in Ciampino, the venue of the dance tournaments. Differing information on accreditation, which was previously given, are thus obsolete. 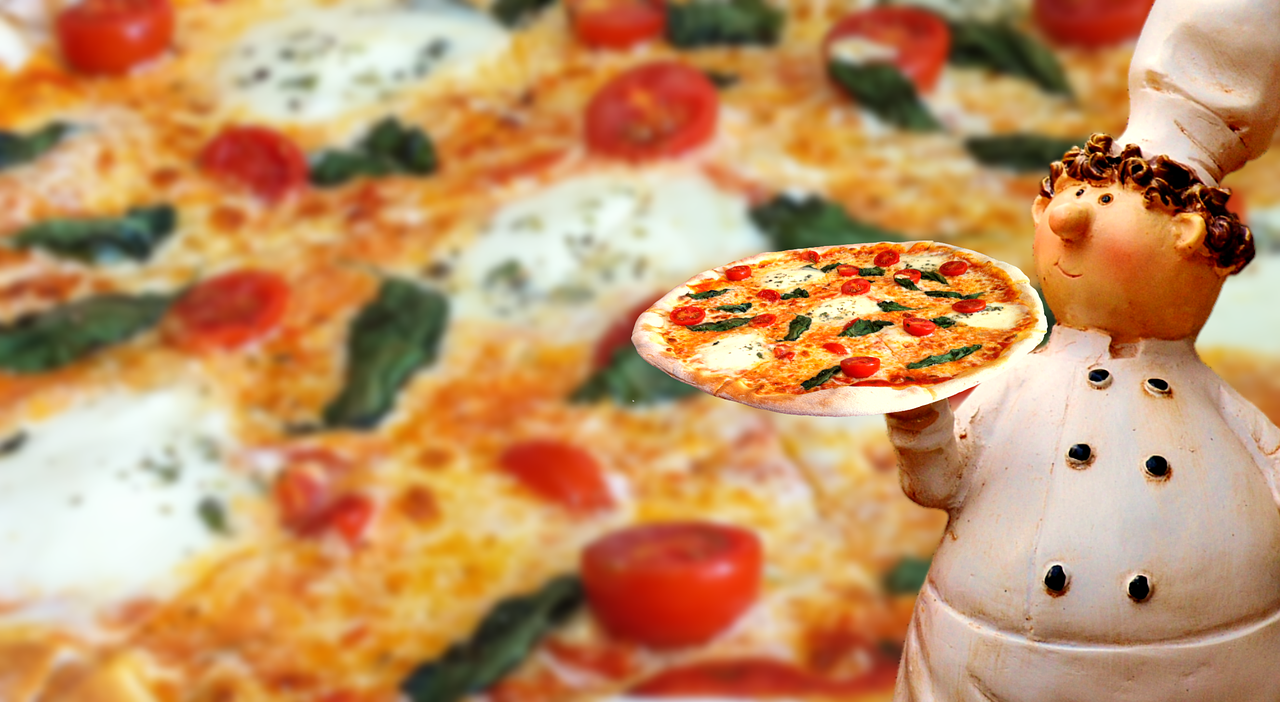 Anyone who has managed to reach the Palacavicchi need not worry about starving from hunger or dying of thirst during the tournament days. The situation is pleasingly good in this matter. Although it is not yet known exactly what the Palacavicchi’s own gastronomic offer will look like, the following catering options are available:

During our short visit to Rome in April, we were able to convince ourselves that the Palacavicci is an ideal venue for dance competitions. Indeed …

One thing is clear: never before the venue of a dance tournament as part of an international multi-sports event has been so isolated, so difficult to reach and in such a profoundly ugly environment as in this year. Between traffic routes for cars, trains, airplanes and horses (!) the “Palacavicchi” is located in the middle of a huge commercial area beyond the public transport.

But it does not help. We have to go there. And we will make it!

To make things even more complicated, several streets around the tournament venue are called “Via Ranuccio Bianchi Bandinelli”, and several buildings are named “Palacavicchi” or “Pala Cavicchi” or “Casa Cavicchi”. The easiest help: If you turn from the “Viale J.F.Kennedy” to the southwest in the small industrial area in which the dance venue is located, you see a petrol station directly to the left. Just a little further on there is a driveway on the right side, and you have to get into it. Should you miss this spot and come across a glass pizzeria with a big palm in front of it, then you have to turn around again. “Our” Palacavicchi building is located very close to the main road.

The different ways to get there:

If you stay in one of the hotels near the competition venue, you will not see much of the city of Rome, but you have the great advantage of being able to walk. But beware: The “Viale J.F.Kennedy” and the “Via Ranuccio Bianchi Bandinelli” are busy streets that have neither a sidewalk nor a fortified side strip. You have to go over gravel and grass. No fun, even if you have luggage with you. But it is doable.

By the way, it is about 2 km to the train station Ciampino to the Palacavicchi, from the subway station Anagnina even more.

From Rome’s main train station, Stazione Termini, there are frequent, fast and cheap trains to Ciampino Regional Train Station. But then the problem begins. Several bus lines leave from there, but none of them follow the “Viale J.F.Kennedy” over a longer distance. All lines turn off far before reaching the junction to Palacavicchi. In sum, not a good option.

That should work quite well. I cannot give exact information about the prices for a taxi, but the price from and to the train station Ciampino should be 10-15 € per direction.

In my opinion the best option for those who are staying in the center of Rome and do not want to spend a lot of money on transport. From the terminus Anagnina of the subway line A, bus 503 departs three to four times an hour (timetable information: https://viaggiacon.atac.roma.it). This is a ring line that runs in one direction only. So you cannot get on the bus in the wrong way. The line is very slow because it criss-crosses residential areas. But when the bus arrives at the BANDINELLI stop, it is only a good 800 meters to walk (see above) to the venue. You can use a ticket for € 1.50 both for the subway and the bus. But you should calculate a lot of time.

5. By metro and EuroGames Shuttle:

Those who want to reach Palacavicchi without having to walk can connect the metro with the official shuttle service. But there are quite a few snags: You already should have prebooked your shuttles until 03.07.2019, the price is very high, the shuttle service operates only once in the morning to the competition sites and once in the evening back (it was announced to us otherwise) and it does not take the direct way to the Palacavicchi. And will it even work? Who can dare to say that now? Maybe it will work wonderfully, but maybe it will be a disaster. It is an option for the brave ones.

6. By underground and taxi:

That should work well (like option # 3). Significantly more expensive than with the subway and the bus, but also much faster. As long as there is a taxi rank at the subway terminus.

By car?? Only some very few dancers will go to Rome by their own car, and those who live in the center of Rome should think twice about driving there, but those who have accommodation in or around Ciampino should seriously consider to book a rental car (preferably directly from the airport). The prices are not high and you get rid of many worries. However, you will need strong nerves for standing the Roman road traffic. In any case there is parking in front of the Palacavicchi.

If you live in Ciampino and do not like running, the taxi is a possible option. Especially when traveling with two or more people. But if you live in the center of Rome, you should know that this option will be very, very expensive.

You see: All roads may lead to Rome, but none to the venue of the EuroGames 2019 dance competitions. At least not a single really great one. But as I already mentioned before: Yes, we can!

You will find general travel information for your arrivel or travelling around in Rome in this post: Arrival Instructions Rome. 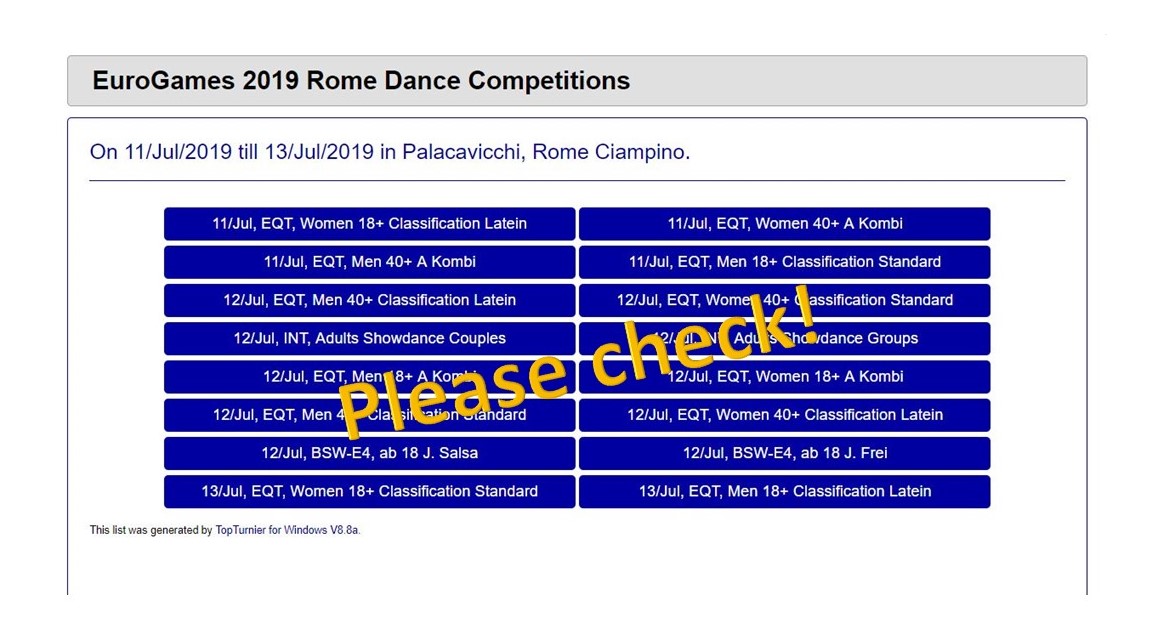 Done! From Rome, we finally got the start lists from the EuroGames registration portal. Programming such a portal is certainly not easy, but we’ve heard from you over the past few weeks that it has often not been possible to register for different competitions with different partners. And that’s why there are still some “half dance couples”/dancers without dancepartner on our list.

So my request: take a look at the published start lists (last updated: 02.07.2019) and let us know in an email to competitors@romaeurogames-dance.eu if something is wrong.

You are in Rome for the EuroGames, would like to start at the dance competitions, but do not have a dance partner? There is a gentleman for you for men Ballroom and/or Latin, Open and/or Senior, preferably A/B level.

Please email Thorsten and Dörte, competitors@romaeurogames-dance.eu. We make the contact and make it somehow possible 🙂